Cinnamon is not just for Christmas time, cinnamon cookies, and mulled wine, no, cinnamon can do much, much more! Read about its positive characteristics, the plant, its history, impact, and uses. The positive qualities of cinnamon

Cinnamon simply smells good, and there is rarely anyone who does not like the scent of cinnamon. In addition to distributing the exotic breeze of cinnamon, it also promotes a pleasant well-being. So it is not surprising that thousands of years ago people tried to use cinnamon as more than just a spice.

It was already known in antiquity that cinnamon has an antibacterial and antifungal effect and gives off a fragrant scent, so that foot perspiration and unpleasant foot odor simply do not arise. In addition, cinnamon keeps the feet nice and dry and also prevents athlete's foot and cracked heels. The production of the first shoes made of cinnamon goes back about 2000 years.

Since time immemorial, cinnamon has been said to have properties which are beneficial for love. For this reason, the wise King Solomon sprinkled his chambers with myrrh, aloe, and cinnamon essence to spice up the night of love. In the Persian region, ointments of cinnamon and honey were used to strengthen desire and virility. In the Middle Ages
Cinnamon, like most spices from the Far East, had a firm place in medieval medicine. Thus, cinnamon was said to have strong and very warm energies, which reduced blemishes and induced the body’s own healing powers. Anyone who had suffered from gout or malaria was supposed to drink warm cinnamon wine every day. In the 16th century, cinnamon became the fragrance of the tsars. The English doctor Jacob Frenscham was sent by Queen Elizabeth to the court of Tsar Boris Godunov. He brought with him a supply of beneficial medicines. Among other things, some cinnamon products were there. This tsar would make a habit of using Kanelbrantwein (cinnamon brandy) for the rest of his extravagant life.

Modern era
In the twentieth century, for an upset stomach, the treatment was thick rice porridge with lots of cinnamon and little sugar. Cinnamon often had the task of acting as an astringent. In addition, cinnamon provided a good night’s sleep. The stomach and intestinal flora respond very well to cinnamon when feeling bloated and flatulent. Cinnamon even has a very positive effect on stomach problems. To relieve these symptoms, taking a teaspoon of ground cinnamon is sufficient. Cinnamon is also appetizing.

Cinnamon can also help with a cough, sore throat, and inflammation, as cinnamon inhibits the growth of bacteria and fungi and has antibiotic and antibacterial properties. Cinnamon tea has a soothing effect on sore throat, cough, or runny nose. When thoroughly chewed or in powder form, cinnamon is also effective against nervous disorders and depression.

Overall, cinnamon can have disinfectant, anticonvulsant, circulation-assisting, calming, and mood-enhancing effects. Cinnamon can even help with inflammation, rheumatism, lower back pain, colds, and aches.

The benefits of cinnamon - Ayurveda

In Ayurveda, cinnamon has an even higher status--it is recommended with food to treat certain disorders (for example, menopausal symptoms). In traditional Chinese medicine, cinnamon is used as a remedy, for example, for chills, tension, and circulatory insufficiency. Cinnamon is used in aromatherapy, primarily for its invigorating, warming, and inspiration- and creativity-stimulating effects.

Due to its disinfecting properties, cinnamon is recommended as an additive to fountain solution, insoles, summer shoes, and slippers. With this, it has--as cinnamon aldehyde--the ability to repel insects.

Particularly exciting were studies that showed that cinnamon has an insulin-like effect through the ingredient MHCP and thus can lower blood sugar levels. Incidentally, there were also positive effects on blood lipid levels. However, this effect is not enough to be able to use it therapeutically to treat diabetics.

The following positive benefits can be ascribed to cinnamon:

• The metabolism can be positively influenced by cinnamon

• The immune system can be strengthened with cinnamon, which improves the function of the liver and kidneys.

• Due to the essential oils it contains, the cinnamon has a disinfecting effect.

• Thanks to the essential oils, resp. the disinfecting effect of the cinnamon also helps to relieve cold symptoms.

• Cinnamon balances the temperature, so it warms in winter and cool in summer.

Benefit from the positive effects of cinnamon - cinnamon insoles

Cinnamon soles pamper your feet and body with the positive properties of cinnamon. The pleasant scent makes your feet smell nice, and the cinnamon also absorbs sweat. The antibacterial and antifungal properties of cinnamon can prevent foot problems such as nail fungus, nail bed inflammation, athlete's foot. With the cinnamon shoe insoles you always have a pleasant shoe climate. In winter they warm your feet, in summer they have a cooling effect. 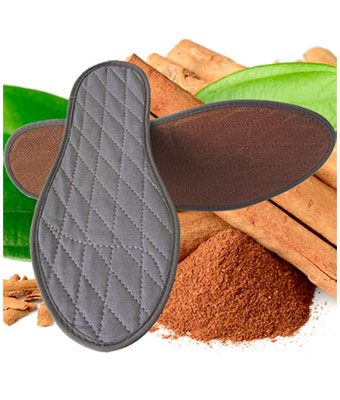 The Benefits of Cinnamon Soles - A Brief Overview:

• Are probably the best against bad foot odor and sweaty feet!

• The cinnamon relaxes the legs and feet, and the various foot reflex zones are gently massaged with every step.

• With the cinnamon insoles you never have too cold / warm feet again. A pleasant and balanced foot climate thanks to the cinnamon. 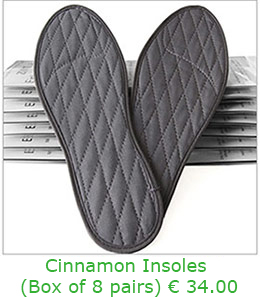 Cinnamon is one of the oldest spices in the world and was cultivated in 3000 BC in China as a spice. The Chinese knew it by the name of Gui and believed that it would bestow immortality. They also exported cinnamon via the former Silk Road to the Middle East. The Chinese were not the only ones who cultivated cinnamon at the time. A finer variety was grown on what is today Sri Lanka, which at that time still bore the name of Ceylon. This cinnamon variety is known to most today under the name Ceylon cinnamon.

Cinnamon is the subject of numerous myths and legends from various epochs of our time. The Romans, for example, believed that cinnamon came from cinnamon birds and that it was collected in their nests, which were shot down by brave hunters with a bow and arrow. Herodotus in 450 BC. also believed that cinnamon grew on the bottom of lakes. In the Middle Ages, cinnamon came straight from paradise and was washed into the waters of the Nile. There, cinnamon was then captured by hardworking fishermen.

Cinnamon used to be a sign of exclusivity and power. In the Middle Ages, the cinnamon trade was dominated by the Arab peoples. The road to Central Europe was long and dangerous, which affected the price and made cinnamon almost unaffordable. Motivated by the high price, Europeans began to search for the origin of cinnamon. It was the Portuguese navigator Vasco da Gama who found what he was looking for on the island of Ceylon. The Portuguese soon took control of the European cinnamon market and dictated the prices. In 1594, the cinnamon monopoly of Holland was taken over by previous armed conflicts. England later tried to get a hand on the profitable trade.

With the beginning of the colonial period, the seasoning became cheaper. The interest in heavily-seasoned food fell in Europe, and consequently, the price did as well. In addition, there were major advances in medicine, which left many of the spices forgotten. The centuries of greed for exotic spices came to a standstill. Connoisseurs increasingly relied on coffee, tea, sugar and chocolate more than on the old spices.

Since the beginning of the 19th century, almost every household could afford a pinch of cinnamon. In Central Europe, cinnamon was soon used only for sweets. Other uses in the kitchen and knowledge of its healing power were forgotten. Today, the kitchen and gastronomy are increasingly turning to the tried-and-true cinnamon. Fortunately, science, too, remembers the many positive qualities of cinnamon.

The cinnamon plant--botany and cultivation - Ceylon or cassia cinnamon

The unmistakable and beguiling scent and incomparable taste of cinnamon still has something magical, brings about the idea of wealth and foreign worlds. Something warming sticks to it, a touch of exoticism, even a pinch of adventure. But what exactly is cinnamon? Where is it grown today?

The cultivation of cinnamon trees requires average temperatures of 26-28°C and an annual rainfall of 2,500 mm. Cinnamon trees grow best in loose, sandy soil without retained moisture. The harvest takes place at the end of the rainy season. While in Ceylon cinnamon, the bark is peeled off only by the tender root shoots and the trees are kept short by constant beating, the cassia cinnamon tree may grow fully. It is harvested for the first time only after four years. One- to two-year-old shoots (twigs) are cut off and leaves are removed. Then the bark is separated by hand. Then the outer and middle bark are removed to reach the inside of the bark, which is just a millimeter thick.This inner bark is then peeled. It curls in on itself. After that, the rolled-up sticks are wrapped in mats and fermented. The cinnamon sticks are then ground to a powder and combined with some ginger and liquorice, which is then used to fill our cinnamon products: cinnamon insoles, flip-flops, slippers, sandals, and house shoes.


Warning--Allergies and cinnamon during pregnancy
It has long been known that cinnamon can cause allergies in sensitive people. During pregnancy, cinnamon should be consumed with caution, because its oil can induce labor.